New York City is leading the green way with affordable housing that emphasizes healthy living and sustainable, beautiful architecture. Rainwater HOG is delighted to be included as the face of rainwater harvesting for the residents of Via Verde.

Giovanni Diaz, project manager from Lee Weintraub Landscape Architecture, calls the five Rainwater HOG tanks installed on the fifth floor of the much-lauded Via Verde, a new affordable housing development in the South Bronx, alternately a “showcase” or a “celebration” of rainwater collection – one of the green tenets for the building.

“Via Verde’s dual emphasis on resident health and architectural sustainability expands the concept of “green” building,” writes Karen Kubey in a thorough and informative piece for Domus.

Her report encapsulates high profile praise for Via Verde:

New York City Mayor Michael Bloomberg called the South Bronx project “one the most environmentally advanced affordable housing developments in the nation,” while architectural critic Michael Kimmelman made Via Verde the subject of his front-page, New York Times debut last September, writing that the development “makes as good an argument as any new building in the city for the cultural and civic value of architecture.”

Installed on the fifth floor roof, our modular water catchment system provides a visible, accessible water collection point for building residents who will use the rainwater to grow their community garden plots, located on the same level. 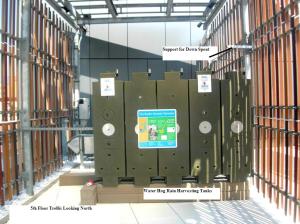 “We wanted an accessible water source that was sustainable – which means rainwater,” explains Diaz.

HOGs provide the visible component to a larger concrete water collection system housed underground that holds enough water to fully irrigate the 20 floors, 10 rooftops, and the courtyard level of the Via Verde building.

“Rising south-to-north from three-story townhouses to a 20-story tower, Via Verde wraps around the edges of its narrow, triangular site, forming an intimate courtyard and maximizing sun exposure,” writes Kubey. The name Via Verde, or the green way, references the distinctive forty thousand square feet of terraced green roof that incorporates, among other features, an orchard, a fitness area, and a community garden.